On a lighter note: Do your scans look like a form of abstract art?

I had a CT scan with contrast ink done yesterday. Nothing is wrong, it's just been a few years since anyone had a look under the hood.

It's the first time I got a copy of my scans on cd. I had fun zipping through the images - and changing the colour settings.

I'm thinking I could probably make a couple of pieces of wall art out of some of the scans. Has anyone else had a similar thought? 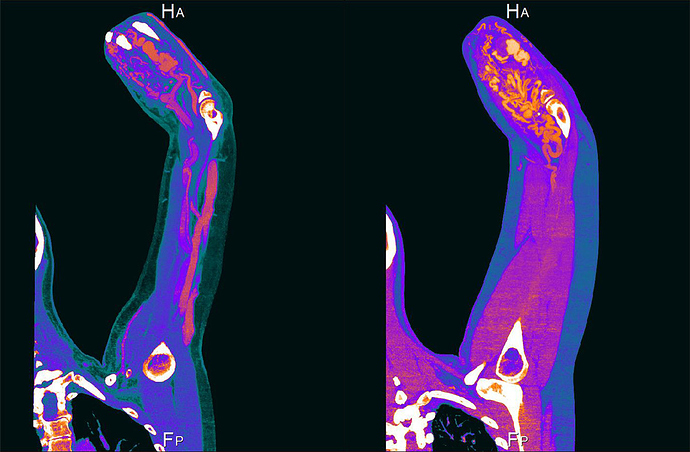 Yes, actually, I thought about my brain scan and even though the initial information was overwhelming, I appreciated the intricacies. My AVM is also on a CD, but I haven’t played around with color…yet, anyway. Do you plan on transferring the image to another medium? If so, let me know. I might ask an artist friend of mine to play around with the image.

Paintings , jewelry and clay works of brain with formations have been made by some members . Perhaps you can find dome in the photo archives . Be good to you . Take care of you .

Holly, I never could understand the pictures they showed me from my scan...I just looked at them and said "WOW..."made belive I could read it"....hahaha

I never saw my scans while I still had the AVM, only the scans after the bleed/crani. I laughed at the missing brain areas! I think artwork is a fabulous idea.

That is funny, when my doctor showed me my scans he was talking about how beautiful my AVM looked. Only a neurosurgeon could look at something like an AVM and see something of beauty!! Although I can see where he is coming from. To someone who doesn't know what it is, I am sure it could look like some fantastic abstract art!