Waiting for angio for my son

Ok sorry I’m very new and confused to all of this and freaking out- We discovered last week my 8 year old has a very small AVM the MRI report says in left tmporal gyrus? It didn’t say ruptured, would we know if it’s been ruptured? Or would the angiogram have to detect this? Does anyone know about this location? Apperntly it’s the speach part of the brain? The MRI report says it’s less the 1 cm- I’m assuming is also good news?! Please advise- I can’t google anymore it’s really stressing me out. He is going for an angiogram next week and then neurosurgeon apt after-

This is what the MRI says 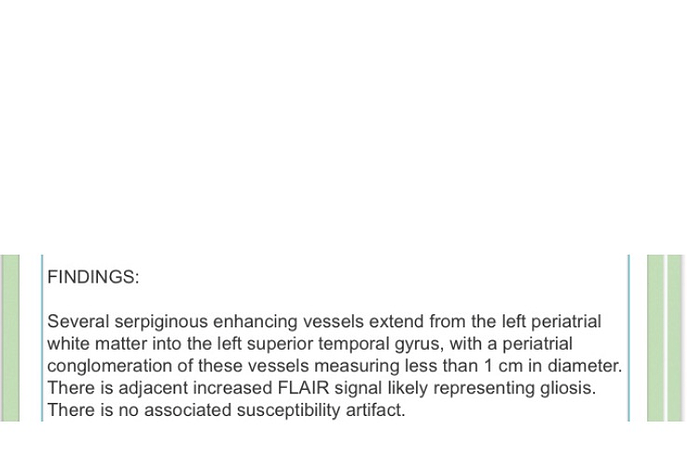 Hi Aedhawk21. I’m so sorry to hear about your son. I think if I discovered one of my children had an AVM I would be devastated too. However it is me with the AVM. Its way down in my brain, too deep to operate without serious risk of deficit. It was discovered when I was 14 and I’m 43 now. So I class myself as incredibly lucky. It is proof though there may be no need to panic. Its not necessarily going to bleed imminently. I;m not sure how true it is but I did once hear that small AVMs bleed more often statistically. But without such a devastating effect. My AVM is a big’un and I don’t know what the outcome would be if it bled. All the best to you and your son.

I take comfort that the MRI says sub-centimeter. That is a good thing right??

An angiogram will tell all. It is the definitive test for finding avms, they say. Be happy it has been booked. The procedure is relatively simple, just lie very still and let the doctors do their work. Recovery time is a few hours. An angio will tell you if it has ruptured but with me the sudden unbearable headache was the first clue that my avm had bled. You would know if this had happened. Not all avms bleed. Good luck, stay focused, and trust your medical team.

Thank you, it’s for my 8 year old boy. He has back of head pain and dizziness but the headache has never been severe

The trouble with reading radiology reports is they tell you everything they see, not just the stuff that is important or current, nor what is cause v effect.

Sub-centimetre means less than 1cm. Other than Lulu’s info regarding bleed incidence, small is good by my reckoning… we don’t want anything massive. The main thing is, we’ve found it and it’s not big. Treatment of something relatively small might be through radiotherapy or embolization and by my reckoning, that’s much less invasive, less risky than craniotomy, though each treatment option carries it’s own set of risks.

I found it necessary to be patient. In the UK, at least, progress can be very slow. The angiogram is a good step and will lead to a recommendation on what intervention is best.

My son is 13. The idea of this being him rather than me doesn’t appeal, so I know it is a very scary thing. But it is very treatable and there are lots of people here who had AVMs at a young age who’ve done great.

I’m convinced the hospital team will lead you through this successfully. Honest.

Hang in there… you’re doing great.

Thank you so much for your response! I know the hardest part is waiting for the next steps and the unknown

…Definitely! I can vouch for that!

Its difficult to interpret the MRI report as someone who isnt a doctor, however in saying that if it was ruptured it would mean there was a bleed which isnt the case…thankfully!

I know this is a hard time for you and your family and as a father I could only imagine how it feels…but you need to be strong for your son and get through this as there is light at the end of the tunnel and many many many success stories.

Keep us posted and will pray for you guys… God bless!

I am so sorry for you and your son. It is so scary and I think even worse for the care takers,
He is young and even if part of the brain for speech is impacted its a different part of the brain we use to write. I had a stroke and was still able to write.
Make sure they give you a prescription for anti nausea meds like Zofran. You can be vomitting with the pain meds and not ideal when your head hurts.
He will also get constipated so get some stool softers for post surgery.

Exactly, ruptured would be an emergent situation. You would not be sitting at home. It is presumed to be “unruptured” unless ruptured is mentioned. Extra advice- because I feel you can never know enough. Google (after your rest) “Signs of stroke” just for extra-assurance. Asymmetrical (uneven) smile is indicative of a bleed; slurred speech; change in gait (walking). Rather than worry, I’d like to know what to look for. Projectile vomiting is a sign of increased pressure in skull. The AVM is small; highly doubtful that you’d see that vomiting but it is worth mention. Anything odd, like feeling a “zap”. No need to ask him questions; at his age he should be a reliable informant. Not a doctor here, but medical background. “Artifact” is a positive work, it’s been there forever causing no problem. To my eye, I would not lose sleep over this. I say this knowing you are definitely following thru with plan. I am a worrier, by nature. Kudos to whomever reacted so strongly to a sudden headache!

No Motrin as it affects blood clotting time. No NSAIDS like Aleve at all. Just Tylenol, Kids never get aspirin. Helmets for sports, bike riding,etc.

Hello, like many others said, I am sorry to hear this report. We also had routine screenings (MRA) for our young children and they found a 2cm AVM in our 9 yr old son back in November. We investigated radiation/gamma knife, embolization and eventually surgery/resection/removal. We chose surgery and had it performed early this past February. So far, we have had an incredibly fortunate recovery so far. My advice to you would be to investigate and research all possible options and trust your gut.