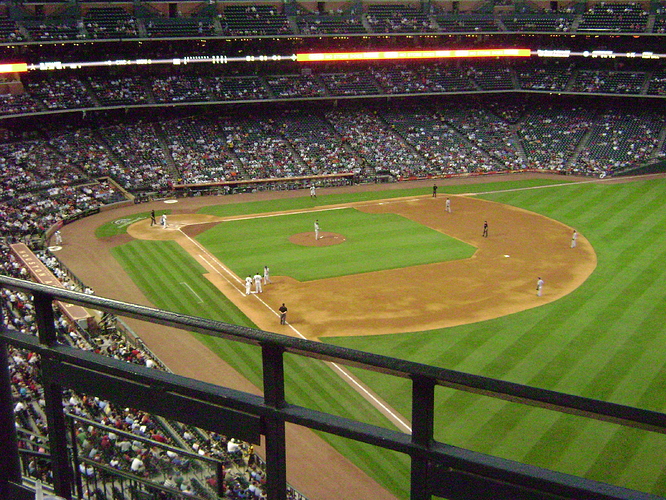 be8fc9f4502a5f68426e4301808e62ac1f2c805c.JPG3072×2304 2.4 MB
Houston Texas - Tonight was not your normal night. True, it was normal in the sense that at Minute Maid Park, the home of the Houston Astros, the starting pitching gave up 5 runs in the first inning. And it was normal for this year that we saw our bullpen collapse and give up 3 runs in the 9th inning after we came back to within a run in the 8th inning. Those things have become too normal. But beneath the surface of this my 3rd Astros game this year, there was something Goliath going on. What was it? And no, I’m not talking about the Cubbies winning for the multitude of Chicago Cubs fans I know out there.

What was not normal, was that for the first time since my brain injury stroke(AVM), I went by myself to the ballgame. I could have gone with others, and have this year, and will be going with others later in the coming weeks. But tonight, after going for a few games, I saw and felt comfortable traversing the stadium, and the long walk back and forth, by myself, and not using my wheelchair. Behind the scenes in my life, just going to a convenience store and going in and paying for gas has been monumental. And it’s not the price I’m talking about! I’m fine getting to my car. And I’m fine driving. I can drive forever with no problems. But when I get out, and go into places, it’s not easy. I have use of only one arm, and my left leg has problems walking very far. But the past week, I’ve seen that the stadium has become familiar to me. That I know where I can safely go, and I see how far I can walk before my foot gives out. So tonight, I did it!

My seat was further than I thought it would be, because it was not on the same side as my mini-season tickets. But by spacing things out, I was able to get to my seat, put a cold water in my pocket, and get to my seat. I stayed there the whole game. And the irony of ironies happened. Next to me , to my right, was an older couple. We began to talk, and the man also had a stroke about the same time as me. There next to me, was a couple who totally understood what a big achievement it was for me.

Well, the Astros might have lost tonight. But I can genuinly say, thank you for your friendly staff, the concession woman that opened my water for me. Thank you for the free and close parking for those that are physically challenged. And thank you Astros. Thanks for letting me gain a little bit of my independence back. I'll forgive you for the lack of good pitching, at least this year......
Lesley_S_Q April 14, 2011, 11:07am #2

Dear James, CONGRATULATIONS and well done; you must feel fantastic. It's so exciting when we can achieve something we used to take for granted! I am very happy for you...."keep on, keeping on" James.

Oh James…you are so amazing!!! Thank you for posting this blog!!

That is just AWESOME James & congratulations!!!

A monumental event for you and inspiring for others - thank you for sharing. :)

James, that is great. It's good to get back to doing things you did before the AVM bleed. I remember my first Tenn Titans game after my AVM bleed, approx 4 months after my bleed. I had been to almost every game for the previous 10 years and could get to and from the stadium and around inside stadium with my eyes closed. But my first time back I really had to try and remember where we parked, where my seats were, etc. I know my friends never knew how stressed out I would get forgetting where my seat was after going to the bathroom, etc or they never knew how I had to concentrate on following them back to the car. But after a couple of games it started coming easier (bonus, I would forget the game when the Titans lost..haha).

Have fun at the games and who knows, maybe they can make it the World Series. I’m going to throw out some old Astro names. Did you see these guys play? Cesar Cedeno, Don Wilson, Bob Watson.

Greg, oh definetly know those players. Bob Watson has also been a coach for the team. I think things being familiar after a brain injury is very helpful, especially if there is a physical disability. You worry with the "what if"s a lot. Btw, went to my first Texans game against the Titans with my brother last year, lol.

YOU GO JAMES, I KNOW THAT FELT GREAT, IT DID FOR ME THE FIRST TIME MY FAMILY LET ME DRIVE AGAIN, I STILL HAVE TO BE VERY CAREFUL AND NIGHT’S ARE NOT GOOD FOR ME YET BUT JUST TO FEEL THAT INDEPENDENCE AGAIN IS GREAT SEE YOU SOON AT THE COOKOUT IN MAY MUCH LOVE

I loved your post, so inspiring. You show how continued patience and hard work brings great results. I love the Yankees, and know how tough those stairs are without any issues (very steep!), so I can imagine going by yourself was a great triumph! Thanks for inspringing! Love the picture.

Thank you Sharyn. I’ve since been to a few more. It’s amazing how friendly the staff are. They’ve carried my food to my seat for me several times. Only problem is they keep losing, lol.