It is with great sadness that we have to relate the death of @TJ127, one of our longest and perhaps most influential members.

TJ was first diagnosed with an AVM in his neck in 1978. “At that point, no one in Michigan even knew what they were!” Since then, he went through major embolisations/surgeries in 1978, 1986, 2009 and 2018. He had a further two embolisations last year. The treatments up to 2009 were successful and after a normal recovery period, TJ went back to relatively normal life. The operation at the end of January 2018 was more impactful and TJ had to give up work.

In 2004, the Vanderwells adopted two kids from Haiti. After the 2010 earthquake, Tom spent days co-ordinating care and evacuation for 80 Haitian children from one orphanage that were in the process of being adopted to the USA (rather like the Vietnam baby evacuation). His wife headed to Haiti as a nurse at that time and helped bring some sick adoptive children home safely as well. The family still have strong ties to Haiti. He literally didn’t sleep until those kids made it home.

Tom was a bachelor of English from what is now Calvin University. His skills in English helping his customers when he was a mortgage lender and work he undertook with non-profit organisations. Tom was a committed Christian and ardent advocate of social justice, in particular fighting racism, setting out his thoughts on many subjects that troubled him on his blog, https://www.tomvanderwell.net/ and we have seen a lot of his thoughts here on avmsurvivors, as well.

Though we all worry about our AVM cutting our life short, Tom died from a rapid degenerative disease unrelated to his AVM, though diagnosis may have been hampered by thinking the underlying problems he had over the last year were all to do with his AVM or surgeries.

He leaves his wife, five adult children, his first grandson and his mom.

His wife Cheryl announced his passing on Friday:

Our faithful and loving husband, father, grandfather, son, brother and uncle left his earthly life early this morning and is now healed and whole in Heaven. He was welcomed there by his dad, grandparents and infant sister.

Friends, your prayers and support have been deeply felt and loved. Thank you for upholding us as we have walked this long road. The doctors now believe that Tom had a progressive and degenerative brain disorder. The hospital staff at Butterworth on 4West 4Heart were incredibly skilled and caring and I am so grateful to them.

Prayers for comfort and peace are appreciated as we live the next days, weeks and months without Tom. I thank God for the guarantee of eternal life for those who believe in Him. There is no doubt in our minds that Tom is in heaven with his Father God.

The funeral arrangements start on Thursday this week.

Obituary, tributes, photos, and flower ordering for Thomas John Vanderwell, who passed away on August 12, 2022 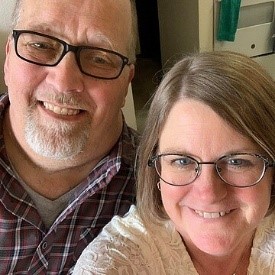 TJ sent me my very first welcoming message on this platform and I immediately felt like this was a safe place as I read his words. TJ helped cement in my mind that this platform was one where I could talk openly and could be around like-minded individuals who are burdened by a condition that does not define who we are. I am very sorry to hear of his passing and my prayers go out to his family

God rest his soul. Prayers offered for his family
Mom of an AVM survivor

I almost want to write to Tom myself.

The way I feel that is that Tom has been a big reader and talker on here since his operation in 2018 and that’s what this place is for. When he posted his CT results in autumn 2017, I read them through and wondered “What on earth can I say to this guy?” his shoulder/neck AVM had gone on the rampage, creeping up into his cerebellum. Through the ensuing months, then years, Tom & I have grown, getting to quite a friendship. We promised each other a beer if we ever found ourselves across the pond.

He’s been very quiet for quite a long time. I asked after him in January and it turned out he’d had a bit of something going on. He was not his usual self. He had embolisations nos 17 & 18(!) last June (2021) and I think he had a further one in January.

I last spoke to Tom back in March. We had a video call together: having promised each other a beer, I was hoping we might crack a beer open, or a cup of coffee via video call. I tried to set up a call for some time but I’d say he wasn’t very well. When we did get to meet in March he had quite slurred speech and was not feeling very well. We did talk about “his book”: he was trying to arrange his thoughts for the story he might tell about his life and battles with health.

Farewell my friend! It is amazing the power of words. I know I was there for you but thank you also for being there for me. Even when you were not well, you helped others along the way.

The Lord bless you and keep you.
The Lord make his face to shine upon you
And give you peace.

All my love to you and your family.

So sorry to read the news. Many prayers to the family.

I always looked forward to reading TJ’s posts, many ending in tears. TJ was one of the first people I admired on here and it was very hard to hear this news today.

Rest easy, TJ. You are loved by so many.

Im so sorry to read this. Tom was one of the first people I interacted with here, and he meant a lot to this community. I was saddened deeply to see this. He was a pillar of this community.

So how did we found out he passed away?

RIP. You are loved and will be deeply missed. Thank you for leaving a wonderful impact on this world with your kind heartedness and selflessness.

I am a new member, just a few days old; and I have never come across TJ, until today when I received the email about his sad demise. As I understand, he was a God’s own child and lived a life full of compassion to his fellow humans on earth. I have no foudbt he has reunited with his father God and will be floating around the Universe, one with the sea of enrgy that is available to everyone who can visualize.

My condolences to his family, and prayers fo their peace of mind.

Dear family of Tom,
I am very proud and humbled to have received such a warm and loving response from Tom, trying to support me when I was in such a mess at the start of my diagnosis. I hope that I can begin to learn to do the same for others, wherever and however that might be.

Tom was a great support to so many of us, so thoughtful, so insightful. He had an amazing way of expressing his view, and a knack to get the message out that I always admired. This really hit home today, he touched so many in such a positive way. My sincere condolences to his wife and family. RIP Tom, you will be missed.

So sorry to read this about Tom. My prayers go out for his family and all who loved him.

@rafarataneneces his family knew that he spent a lot of time online and knew avmsurvivors was one of those places, so his eldest got in contact with the modsupport@bensfriends.org email address.

If anyone feels at risk of popping off, you can always ask your family or friends to let us know that way and we will gladly celebrate members, not least those who have touched us so deeply.

And, it really is how life goes - to pass from something different

I don’t believe I had any contact from him(I’m not sure), but none the less - RiP

It took me a while to make myself read the whole thread - any of our passing does sadden me a lot.

I’m sorry to hear this news. My heart goes out to his family. I am thankful that they let us know. I wish this would happen more often opposed to just people ‘vanishing’ and us wondering if they decided to just not come on the forum anymore or if something happened to them.

Yes, it is definitely much more satisfying to be able to acknowledge someone’s passing but I guess it depends on how well someone is in the time that leads up to that point, and whether their family know about or think about their online life at that most difficult time.

We’ve been in contact with Tom’s eldest and his family know he had a decent-sized online set of friends, so we’ve been able to assemble an obituary.