I had my first Gamma Knife on the 27th of September 2011.
Im grew up in Germany but I live in Turkey/Antalya since 3 years and du to that I could not have the treatment in Antalya, I had to fly to Istanbul. The good thing is, that everything went extremly quick. I had a stroke on the 12th. Got diagnosed on the 13th and had my first treatment on the 27th. But now.... this 3 month of waiting until my results... Im generaly a very positive person, so I think - I know, that at my check-up the Doctors will tell me: Whoaaa... I think the machine is broken, we cant see your AVM anymore ;)

I feel a litle bit left alone here, due that they dont talk so much to me here and in Antalya, at least at my hospital where I have to go to, Im the only one with an Brain AVM... so they want a little bit answers from me instead of giving answer to me...

This is why I will just write down whats happening here.

Attached you will find my pictures of the Gamma Knife surgery.

And I have to say... sorry... but getting these drills in IS hurtfull! My whole head feelt like its going to burst while I hag that thing on my head. The treatment itself was like... nothing... I was lying on this bench (a little bit like CT) and I was listening to music... and swoop... finished. When they took it of, that was a good feeling and not painfull at all! And after it was just still a little pressure pain but I was really fine. The day after I was flying back to Antalya from Istanbul and had a small Birthday Party (because that day was my birthday) and I was okay. Walking was a little little bit not so nice due to the anjur (do you spell it like that)... that thing when they go in to you with that camera... But I have to say... rather that again, then the real surgery!! So I will not complain! I hope it worked out and after I got my results in December, will write again!

Till then: Just smile and wave ;) and stay positive!!! 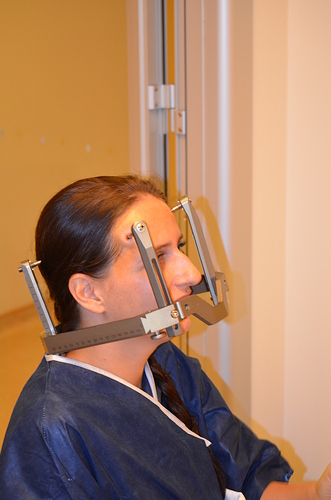 Thank you for sharing your experience. I am waiting for my 6 month post Gamma screenings. You are lucky that they are going to update you so soon. I hope you are AVM free as soon as possible!

My daughter has had 2 Gamma Knifes and have told her it would be 3 years before she would see any difference. Are you having any side effects?

Hello Carolyn, I still have my headache but in a different quality. Directly after the Gamma Knife I still fainted two times, but not anymore and I hope it stays like that. I hope you daughter gets well soon!!! And Holly, I dont know why, but they told me here in Turkey that 3 month after the Gamma Knife I can have the first control. Maybe it is to early... I really dont know... thats just what they have told me..

I had my Gama procedure just over 6 months ago. I was told I wouldn't feel any different until the 6 month mark- and sure enough, I am now starting to have more intense and persistent headaches. I was told I would have an MRI and angiogram 1 year post Gamma- you are very fortunate that they hope to see results as soon as 3 months for your case!

mhm... it makes me suspicious that Im hearing that 6 month post op thing now for the 4. time...
as i also said in the blogpost, they have no real clue here in antalya how to treat me and how everything will be, due to that im the only one here... also my prof in istanbul, who did the gamma knife is not that experienced with avm, more with tumors (where they also use gamma knife). they said, 3 month later mri and one year later angio. but then again... im the first case here and they cant really tell me what will happen or if i will have side effects and so on... so it is more then interesting to hear that from you guys... i will definetly tell to my doctor what you all said, thank you for your feedback!!!

Hi Ersa. There is a sub-group you may wish to join...
http://www.avmsurvivors.org/group/radiosurgerypatientsgammaknifeother
The members there may have more info for you.