Extremity and Other Non-Brain AVM Memes

Although I know that the majority of AVMs occur in the brain and also that the term 'Brain AVM' is thought of as an umbrella term to also include AVM that occur anywhere in the body, for a long time now I have felt like using only the word 'brain' when it comes to raising awareness and helping to educate people who are unfamiliar with AVM may not be helping to make people aware of spina, extremity and facial AVM. Online and especially on FB memes, when seeing info or memes about AVM I usually always only see the word 'brain' in them.

So, I decided to create a meme for spinal people. I'm just now learning to use my photo editor, so the text is a bit fuzzy - I couldn't figure out how to get it more clear, but I'm working on it!

Anyway, dancermom suggested (thank you dancermom for that!) that our extremity and facial members might be interested in having me make some memes for them. If any of you have suggestions and ideas for what you'd like to have in a, or some, memes, please let me know and I would be more than happy to make some. One thing I'll remind everyone of is that we won't be able to use anything in the memes that is copyrighted

This is the one I just made: 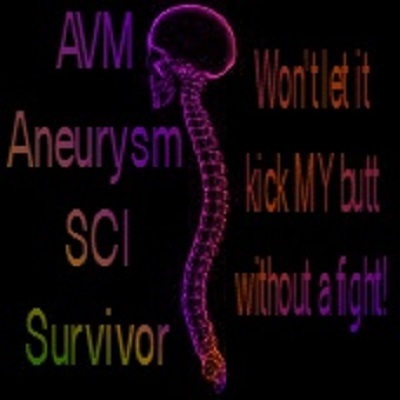 i have 3 AVMs in my right let and I would love to have one made for extremity AVM. However, I do not have a creative bone in my body so unfortunately, I do not have any ideas for one. I will look around and see if I can come up with something though. Thank you!

I love it!! I would wear this as a shirt! Would you let me save this image and use it on my facebook page?

Hi! Absolutely, please help yourself. And thank you!

I think I may need to contact an admin or someone as it seems I get notifications in my email for the forum, but apparently I don't get any for posts in the groups I belong to. When I don't get a notification, I think no one else has posted in the thread in a group, so I apologize profusely for seeing your comment only now jlizotte. It's probably something in my settings I don't have right, and also my fault for not coming to just check more often! ;-)

Hi Brittany - were you able to find something you could use and did the ideas start coming to you ? I'd love to see what you made, if you did!

If not, maybe we could put our heads together if you still want something for extremity AVMs. I'd love to help if you want/need it.

Hope this finds you well - almost a year later!

I would love a meme for pelvic avms.

I will be happy to see what I can come up with for you. It may be a little while though as I am in the middle of a few projects and am also going for my next angio in April, so don't give up on me! I'd love to put something together for pelvic AVMs and will devote some time to getting started at least a.s.a.p. :-)

I so apologize Brittany that I've been sidetracked for so long. I'll be making an update about that sometime soon. In the meantime, please see my reply to Msamberxo below. I won't forget, it may just take me a little time - so many things going on, but this is something I really want to do and will make time for.