I’ve recently had an image study done and with the newer technology, (haven‘t had anything done since 2000) they have determined for the first time that I have an aneurysm along with my AVM and that it is feeding the AVM. The aneurysm lies just outside the spinal cord and the plan is to embolize it within the next few weeks. They believe the aneurysm has caused all my bleeds, causing sub-arachnoid hemorrhages, because if the AVM had bleed I wouldn’t be neurologically intact.

So, unless the AVM forces my hand, we’ll leave it alone as trying to treat it would most likely cause deficits. I’ll upload a picture on my page, the Aneurysm in on the right, the thicker one with the bubbles on it. The AVM is the tangle just left of it within my spinal cord.

It was 1989 when I was diagnosed so this is really somewhat surreal for me. The AVM will still be there with its threat but the unknown, until recently, aneurysm will, with any luck, be embolized as long as doing so doesn’t cause any neurological deficit. 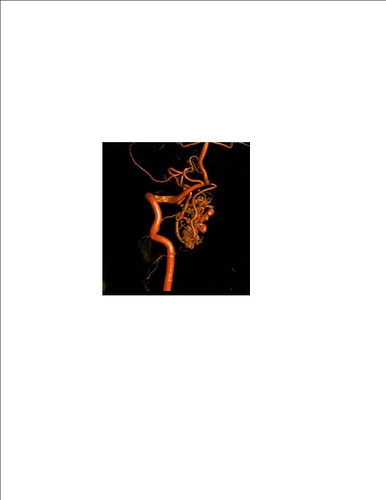 Wow, Kim, that's pretty heavy. It's great that you now have a clear idea of the situation though and a plan of attack, and that you also know it was the aneurysm that bled.

It's excellent that the aneurysm is outside the cord, too.

I'm sure the embo will go just fine, and you'll be glad when it's over that you've done what you can for now to treat.

Keep us posted on how you're doing and how the embo goes for you.

Wow what a tangled mess are bodies can weave ! Happy u have a plan of action. Will keep u in are prayers and best of luck. Keep us posted. TOnna

Let us know when you will have the procedure done. I will mark it on my calendar. Best Wishes!!

Mine looks similar 2 urs but close 2 my motor strip. I hope it goes well 4 u Kim bc it’s a scary thing I’m not gonna lie 2 u. Keep us posted on the outcome. You can always email me bc maybe I try 2 help with advice or something. Talk 2 u soon.!!!

I bet your happy at last they can do something to help.

Embolisation is great, when the doctors discuss it with you they have to go through all the risks and there obviously are risks however my son has an AVM in his brain and the doctors tried to embolise that.

The doctors are really skilled at their job and they go so slow that they can see the dangers before they get there and pull out if need be. They had to pull out on my son because when they got close to the AVM it was too tangled and would have been too dangerous. x