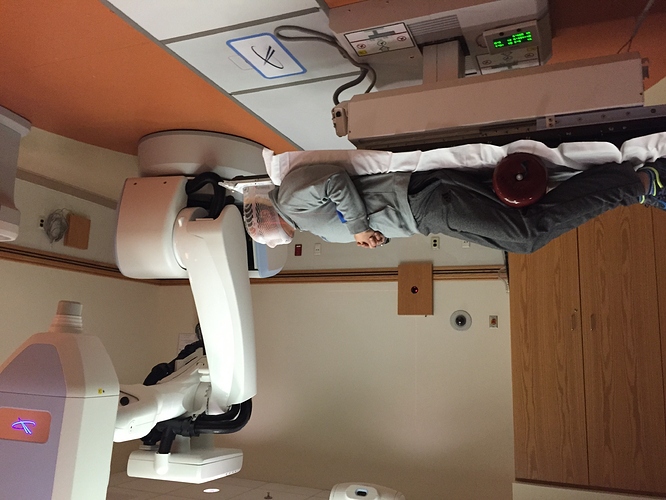 f288bba9f614d0b2e5f2c2a01b71f4ea7b2dcf1e.JPG3264×2448 1.31 MB
Aloha everyone! Thought we'd share our recent experience with the Cyber Knife Treatment my husband had from Johns Hopkins. Just a little background, after getting an MRI for his severe migraines, they bumped into his AVM and was diagnosed back in October 21, 2014. His AVM is 1.1 x 0.7 cm. After going back and forth between brain surgery vs. radiosurgery, my husband opted for the radiosurgery as it is less invasive, less painful and less recovery time, especially that we're about to have our first baby in 3 months. For the newly diagnosed patients, I know how hard it is to decide especially if your neurosurgeon and 2nd opinions were not as helpful as you would think they would. For our case, we were told by several doctors from different hospitals that either brain surgery or radiosurgery are the recommendations for treatment and the ultimate decision is my husbands. Everything is on a case by case basis, and I would recommend jotting down all the pros and cons from financial aspect to severity of AVM before deciding, unless of course your doctor decides for you.

It took my husband a few months to decide but he finally did it. Attached is the picture from his Cyber Knife procedure at Johns Hopkins. By the way, for those who have been debating, we were told by a patient from Johns Hopkins that there’s not much of a difference between Gamma Knife vs. Cyber Knife. These are merely the ‘brands’ and the difference is within the face mask they use to strap the patients head down. Johns Hopkins now uses Cyber Knife although you will still here some employees use the term Gamma Knife out of habit. His treatment was done in April 6, 2015. They were able to let my husband pick whatever song he wanted to be played during the course of the treatment, in the beginning they had to take pictures for about 10 minutes, then 3 doctors will have to sign off before it’s a go and the whole treatment took about an hour. Now we’ll have to cross our fingers and keep faith that it will be obliterated hopefully before or at least at during the time frame they provided. Also just to add, my husband did not have any major side effects after the treatment. He said he felt a little fuzzy on the target area but it could also be psychological, but it was definitely nothing major. Although we were told the symptoms could appear within weeks to months following the treatment, hopefully they won’t be as bad.