Hi everyone
There are over 4000 people on here at various stages
In their AVM journeys, but I wanted to know who
Has actually has their AVM obliterated by Gamma
Knife alone, how big was it, where was it located and
How long did it take ?? Did anyone bleed post
Treatment? Thank you so much for taking the time
To answer.

Mine isn't obliterated yet, but we are working on it.

Mine was obliterated by Gamma Knife. My last MRI showed the space it was occupying was around 17mm but I'm unsure of the actual size of the AVM. I believe it was a couple of years after GK that they considered it obliterated. Location was right Temporal area, unsure of specifics. I worked out heavily in Karate about 2 years after GK, and experienced no issues or bleeds. I did have issues when I got the blood pressure up and did certain things like bending over. So I learned not to do certain things.

MRI with the AVM and Necrosis caused by Gamma Knife. AVM recently removed via surgery. 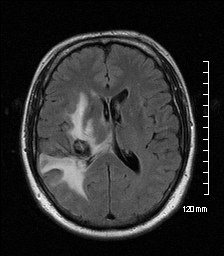 Thankyou both of you for taking the time to reply

Hi! My AVM was discovered in December of 2010. I had an emergency embolization the next day, followed by another embo in February, 2 months later. Then I had my gamma treatment on May 11, 2011. I am scheduled for my first post-gamma MRI on April 30, 2012, followed by a consultation with the dr on May 8th. We are hoping for good news- ideally, I would love to hear that this whole mess has been obliterated. However, we were told to expect the complete obliteration to take between 2 and 3 years from the treatment. Therefore, we hope to at least hear that the effects of the treatment were seen, and that all we have to do is wait some more... The waiting is so hard, but we can't complain- after all, it's amazing we're at this point after all we have been through!
Nigel, what are you up to? are you considering GK treatment, or were you already treated and are in the waiting stage as we are?
-Birdie

Hi, am interested in what you say as I too have an unruptured avm in my right parietal lobe. I am little bit worried about the after effect of gk, which was really the only option offered to me by my surgeon. Have you suffered any side effects since the gk. I am very nervous and worried about upsetting the avm as my quality of life is fine, apart from knowing the avm is there. Any feedback you can give would really really appreciated. Thanks linda

Thanks for taking the time to reply, it’s my lovely daughter who
Has the AVM, she has it in her occipital lobe, she
Had the gamma knife on December 28th 2011 and so we are in this terrible waiting stage
Not knowing if she’s gonna have a major bleed at
Any moment … It’s scary and stressful !!!

So good to hear something positive! Did you suffer any bad side effects. Linda

Linda--I don't know if my side effects are from the June GK or from the July crani, but about September, my headaches started to change. I was getting pre-migraine aura a lot more often, but not always getting a full blown, nasty migraine, and some of the headaches had moved location. My surgeon sent me for an MRI, which showed no bleeds, just remodeling. He referred me to a neurologist & she is working on my migraines. I also had a patch of hair begin to fall out in September. I still feel like my hair is falling out more than "normal", but I don't have that big "hardly any hair" patch. I cut off my waist length hair to lessen the weight and also started taking a supplement with Biotin (recommeded by my hairdresser.)

My surgeon told me to go ahead & live my life when he removed the crani stitches in July. Haven't tried SCUBA yet, though. We'ere going to ask about it when I go for my next GK in June. I returned to dance classes 4 weeks post crani & attend them when I'm feeling well & my schedule isn't crazy. I still seem to be tired a lot & exhausted by the time the weekend arrives.

Thanks for the feedback much appreciated. Linda

I took the GK option as it was my only one. I was treated in July 2011 and so far so good. I know there is swelling around the AVM caused by the radiation but I've barely noticed any difference in the amount of seizures I've had. I did have some hair loss right next to the site of the AVM (3cm, wedged between my right frontal/parietal lobes) and thinning all over but it grew back after a few months just fine.
It was a very tiring few days but compared to the alternative it was worth it. I've had no direct side effects from the radiation and I'm hopefully (as ever) that in 2 months I'll be given good news. If not then I have no fears about having more GK. I will gladly update you in the coming weeks as to whether or not the radiation alone has worked and good luck to you in whatever you choose :):):)

I wish you the best of luck.

My husband had siber knife in Feb. 2012. His is still there but much smaller, we're still in the healing time process. His was 2cm and located in his cerebellum. He didn't have any side effects till after the first year. Since then he has had swelling at the site of the radiation, which has caused balance issues, double vision and headaches. They put him on steroids for swelling and pain meds for headaches.

Geneally tho, i never had any probelms from the procedure, or afterwards.

Check out the facebook page to the site. I was pretty sure on using Cyberknife but after reading it I am totally undecided.