I have seen at least a couple of people saying they are bipolar, so if your AVM is in a specific place in your brain, maybe it can induce bipolar.

I’ll have a little look…

Chingona, I have been reading about migraine in recent months and it is quite a common aura of migraine to have a sense of dread at its initiation. It also seems to me quite difficult to distinguish migraine and seizure as either can have similar symptoms. So I’m sure the panic you feel occasionally is provoked by whatever your AVM is doing and you might look upon it as “false”, a feeling that is induced in you rather than something “true” wherein you should really believe there is anything t…

Also @Carita and @jdale are bipolar:

Hi Emely
I have also diagnosed bipolar. I talked to my doctor about it and it may be Avm that causes it, it becomes a direction in the brain that affects the emotional life. I have the same medicine for epilepsy and bipolar, Lamictal, it’s mood stabilization as well. I also eat high doses of vitamin D and have begun with ketodite. I felt very bad and did not understand what happened to me after diagnosis and medication, so most stabilized. I have to be observant of sleep, food and not stress, but all of this is also important for my other inconveniences. It can take some time with the medicine and create new routines, but with time it will get better. I’ve been helped to find out my triggers that make me sick. Hope it may be helpful. Hug carita

Where is the location of your AVM? My son has one in his parietal lobe and he seemed to change upon the first seizure. He is very angry and difficult to communicate with about any thing.

It’s in my left front temporal.

I do not have a bipolar diagnosis myself, however I did have a big personality change after my bleed. Pre-bleed I was very introverted and anxious about being around large groups. Now, I am more confident in groups and usually more positive than I was before.

My AVM was right frontal lobe.

hi, i have similar experience to Hermione711, my personality also change because of avm. i fixate on things and have bad anxiety. doctor thought that these anxieties could be due to the avm that i had in left frontal lobe.

I wonder if these changes in personality are specific to an AVM or just to any head trauma or brain injury?

I’ve read a fair bit of neurology stuff – one of my favourite books is The Man Who Mistook His Wife For A Hat – and I’m sure that the whole thing about neurology is that you can tell which part of the brain is being affected by something from understanding the deficits or other impacts that something is inducing but not necessarily why. I’m sure that any neurological effect is to do with what it is affecting rather that what it is that is causing it.

I had depression long before I found out I had an AVM. The Prozac that I had been taking for a few years didn’t seem to be cutting it anymore. I would on top of the world one day, and the next feeling like I was in a hole with no way out. I could feel it and new something was wrong. So I did some research myself. And found that there can be various degrees of bipolar. I actually asked my psychiatrist if I could try Lamictal along with my Prozac to see if it would help stabilize my moods. It did. Later on it was dramatically increased for my seizures that I now have. Along with 2 other AEDs. My AVM is in my left frontal lobe which controls emotions and personality. So I am guessing most likely. I asked her about it and she seemed to think the same thing.

I do not think that AVM’s can literally cause bipolar depression, I would rather say that the symptoms caused by an AVM can be very similar even coincident with some psychological problems and can be easily misunderstood by relatives/or misdiagnosed by doctors. That happened exactly in my situation. I was always a very active, ambitious, realist, goal oriented person who always tried to bring out the best of everything that I was involved, weather it was about learning, working or free time, sports and parties. I suddenly started to hear a pulsatile sound in my left ear, it was getting worse and annoying and after a couple weeks I could not sleep. Of course the first reaction of doctors was that these are signs of anxiety, the most evident reason of insomnia is depression, I probably have some psychological problems, I am worried about something etc. I said a million times that I do not have anything to worry about, I am completely satisfied with my professional and personal life, whatever is happening to me is definitely something physical, I can hear it, I can feel that something is working in my head, I was sent to several neurological consults but I received the same answer everywhere: I don’t have any neurological deficits, there cannot be identified a well established reason why they could send me to a CT or MRI scan, they prescribed me some sleeping pills, giving me the advice to look up a psychologist. I was getting really mad, and due to the fact that in my country everything works based on acquaintances finally someone from my relatives knew a neurologist who was willing to give me a referral letter to a CT scan after 2 months of struggle without any improvement, still experiencing the same symptoms. That is how my AVM was found, and on that moment I was scared but also relieved that finally I have a proof that I was right all the time. After all the most important thing is to receive the right diagnosis and look forward for treatment methods. Thank God now, that my AVM was completely embolized I feel fine, I am still recovering but I am almost myself again

Any brain injury can cause personality changes, including bipolar in some cases:

When Mac Fedge, 31, talks about his old life, it’s like recalling an old friend, now gone. Back before a devastating car accident 12 years ago twisted his brain “like an Oreo cookie,” he was different person in a lot of ways, he says. “I used to have... 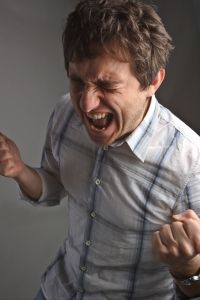 After Brain Injury: The Dark Side of Personality Change Part I

Hi Emily, I am sorry to hear about this but I would think the 2 are linked from my personal experiences in mood changes after AVM and also from conversations with Doctors over the years and how much the brain effects what we feel and do… stay strong and positive and rest that you are not alone… God bless!