I’m wondering if anyone else had a bad day with the eclipse. I went outside after it hit Arkansas and for the rest of the day, any time I went outside, I felt a lot of head pressure. Anyone else?

Started from the time I woke up.

I’ve had a bad day in the UK, but I’m not sure at all if that has anything to do with Eclipse or weather or anything else. Headaches are always there for me, but today has been harder and I’ve had to take pain meds all day (Within prescribed levels

Pardon me for hijacking the subject slightly but was the eclipse worth experiencing / seeing? I’m interested to know whether people were interested, excited, fascinated, bored, just headache or what!

We should always find other interesting stuff (other than politics or religion!) to chat lightly about on here.

It was not visible in the UK and as cloudy as it is possible to get, so I missed it completely!

Some people drove to different states, some thousands of miles to witness it. We only saw partial but yes the photos and news coverage we’re amazing. Something uplifting in the news finally😀 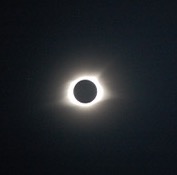 . It was a strange day. I didn’t get a headache from the eclipse but it was a very hot day. Was a 103 out and I’m in southern Illinois.

It’s just that my head was fine until the eclipse happened and after that, I got a lot of pressure on my head. Some AVM people on Facebook said they had the same problem. At one point, I thought I was going to have a seizure. I just wonder if others had the same problem (it’s nice to not be alone).

I had an absolutely miserable day. I couldn’t get out of bed on my own. My wife woke me and “pushed” me out because she knew I wanted to see. My brother came down from out of state and my neighbor had a big to-do.

I could watch it a bit here in Ontario… I could stare at it through a pin-hole I made with my fingers, maybe for a little too long, though as I did feel some pressure in my head. Still, it didn’t get totally dark, but I could definitely see that part of the sun was covered.